More than three-quarters of a million people have died in the United States from a drug overdose since 1999.  Most of those from opioids.  Today, drug overdoses have been driven to unprecedented levels due to the economic shock, social isolation, and increased mental health distress brought on by the COVID-19 pandemic.

Opioids accounted for around 75 percent of all overdose deaths during the early months of the pandemic and around 80 percent of those included synthetic opioids such as fentanyl.  In addition, the lack of being able to obtain access to addiction support and 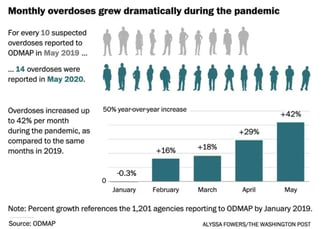 medications that require face-to-face visits has only exasperated the problem.

To further put this into perspective, in 2016 there were 63,600 overdose deaths, yet during the 12 month period ending in September 2020 the annual number had climbed to 87,000.  While the CDC is still tabulating actual figures from all of 2020, the final total is expected to exceed 90,000 overdose deaths, compared to 70,630 in 2019, a 27 percent increase. This would be the highest annual number on record, and the largest single-year percentage increase in the past 20 years.

According to an NPR report, the White House’s Office of National Drug Control Policy stated the number of deaths for Americans 35 to 44 years of age has continued to increase and is the most at risk demographic for a drug overdose.  Alarmingly, though this is a global epidemic, United Nations data has shown that although America has around 4% of the world's population, it experiences 27% of the world's drug overdose deaths.

Though the 35 to 44 age group is the most at risk for overdose, increasingly young people between the ages of 18 to 24 are more likely to suffer mental health problems during the pandemic than any other age group.  According to a recent article in Forbes, a CDC survey reported that 63% of young people are suffering significant symptoms of anxiety or depression due to the restrictions of the pandemic.  Nearly 25 percent reported they have started or increased their abuse of substances to cope with their emotions.  Considering these age groups are moving into adulthood the impact should not be a surprise due to the interruption in a more fulfilling life experience.  Furthermore, people of all age groups and ethnicities are at high risk of developing Covid-19 related PTSD.  Not surprisingly, the data quantifies an alarming trend that the pandemic will have a long lasting impact on the mental health of not only young people, but those of all ages and societal groups.

Mobile Medical on the Front Lines

One of the greatest assets to tackling this crisis is mobile health clinics (MHC), particularly for those in poverty or other disenfranchised populations.  Deployed to rural communities, urban neighborhoods, schools, prisons and retail centers, these mobile units are a visible sign to those who find it difficult to access the care they need.  MHCs serve to overcome the stigma of  seeking help at hospitals, doctor’s

offices, or even drug-treatment facilities, many of which are currently less accessible for drug treatment due to their focus on COVID patients.  Therefore, during this pandemic mobile medical can be more responsive in reaching those in the shadows, struggling with addictions and too fearful or paranoid to seek help.  In addition, as remote telehealth has become a norm in patient care over the past year, MHCs help to break the barrier of its lack of accessibility for a marginalized population.

It is important to note that drug epidemic is not just “on the street”; it is also prevalent in middle and upper class America, schools, businesses, and every walk of life. The primary functions of most mobile medical programs which focus on the opioid crisis include:

The rise in remote telehealth services via online appointments with providers has shown to be a major asset in providing a wide range of healthcare treatment during this period of isolation.  However, some patients need to have more personal interaction with a provider and drug addiction services is a primary example.  A report published in December 2020 by the John Hopkins Bloomberg School of Public Health recommends that SAMHSA (Substance Abuse and Mental health Services Administration) should fund mobile medical treatment services to reach vulnerable patient populations who are unable to engage in telehealth.  The report titled Saving Lives From Overdose During a Pandemic states that many vulnerable patients, such as those living in poverty or experiencing homelessness, lack the resources to engage in telemedicine.  It is crucial to quickly establish and fund flexible models of patient outreach, including mobile access to treatment, to reach these patients.  The report goes on to recommend that SAMHSA allocate funds to assist providers in expanding to mobile services.  Some Opioid Treatment Programs and harm reduction providers have already purchased mobile units to provide acute medical services and provide prescriptions for buprenorphine, and many are awaiting approval to begin operations for mobile clinics for methadone programs.  To further support these efforts the report advocates that the DEA quickly approve proposed guidance on mobile methadone programs to help stem back the tide. 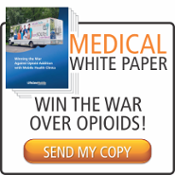