Mobile Clinics: Occupational Health and Safety on the Road

What comes to mind most when we think about occupational health is the Occupational Safety & Health Administration (OSHA) which covers all industries. OSHA is a household name for most anyone associated with industrial work environments. And there is the lesser known Mine Safety and Health Administration (MSHA) which of course safeguards mining, and most often coal mining. Each of these organizations play a vital role in the health and safety of America’s workforce.  However, we don't always associate mobile clinics with bringing occupational health to the workplace.

OSHA and MSHA are each federal agencies with similar missions of regulating and enforcing workplace safety in the United States. The purpose of each agency is similar; however, they play very different roles for their respective constituents.

OSHA is widely known by its acronym to every environment, health, and safety (EHS) professional and the public at large, very much like the U.S. Environmental Protection Agency (EPA). While MSHA is specifically dedicated to the mining industry, and it plays a critical role due to the unique high risks and prevailing hazards related to mining.

The Occupational Safety and Health Act of 1970 was created by Congress which established OSHA to ensure safe and healthy working conditions by setting and enforcing standards, provide training, education, outreach, assistance and oversight. Four years earlier, in 1966 The Federal Metal and Nonmetallic Mine Safety Act was enacted and set in place the Federal Coal Mine Safety Act which provides safety regulations for underground coal mines and was the precursor to the creation of MSHA in 1977. Similar to OSHA, MSHA encompasses the enforcement of safety standards and has authority covering workers “engaged in underground and surface mineral extraction (strip mining), related operations, and preparation and milling of the minerals extracted”.

Because of the persistent and considerable hazards associated with underground mining, and before MSHA, the Coal Mine Safety and Health Act of 1969 was established. Yet there was a great deal of 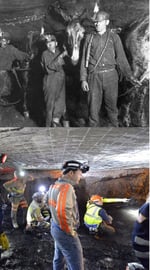 push back from mine operators at that time. Subsequently one year to the day of its enactment, on December 30, 1970, the mines in Jericho, Kentucky caved in killing 39 miners. A catastrophe in a long line of mining disasters that continue to this day. The Bureau of Mines had declared the Jericho mine an "imminent danger" one month earlier due to blasting safety hazards but allowed the mine to continue operation under pressure from the coal company. Coal mining was just coming out of the days of the pick & ax, with mules pulling carts of coal from the mines. However, through the 1960’s technology was becoming prevalent in mining, but the industry was slow to catch up. There was a need for trained mine electricians, mechanics, explosives experts and other engineering skill sets. This need opened the door for colleges and universities to begin programs in safety-oriented mining technology curriculum during the 1970s, primarily in Kentucky and New Mexico.

As general industry and mining have become more complex, and as the pool of employees has grown, it has become more difficult to monitor and ensure the safety of the nation’s workforce. Hospitals, private organizations, and government institutions such as the National Institute for Occupational Safety and Health (NIOSH), an entity within the CDC, have embraced newer and more efficient methods to ensure workforce safety.   One of the primary methods is on-site health screenings performed in mobile medical clinics which travel to workers at factories, mines, and other locations. These mobile units provide comprehensive occupational health screenings which include:

Some examples of programs that provide mobile clinic regulatory compliance screenings for industrial workers, coal miners and corporate employees include:

As defined by the World Health Organization (WHO) "occupational health deals with all aspects of health and safety in the workplace and has a strong focus on primary prevention of hazards”.  The goal of occupational health is to support an individuals’ ability to undertake their occupation in the way that causes the least harm to their health, be it from physical, biological, or psychosocial hazards.

Specific occupational safety and health risk factors vary depending on the particular industry and job function. Construction workers might be particularly at risk of falls, whereas fishermen might be particularly at risk of drowning. The United States Bureau of Labor Statistics identify fishing, aviation, mining, lumbar, agriculture and transportation among some of the most dangerous work environments. The dangers in these occupations rank even higher than police officers and firefighters.

The advent of mobile medical clinics has significantly impacted the ability for employers and communities to ensure a safer work environment. The other option to adequate health screenings is for workers to travel off-site to fixed medical facilities, often on their own time and at their own expense. The converse is utilizing mobile clinics that come to the workplace or other convenient location to provide health screenings and other medical services that support a healthy workforce.

Download our white paper to learn more about the advantages of mobile medical clinics.